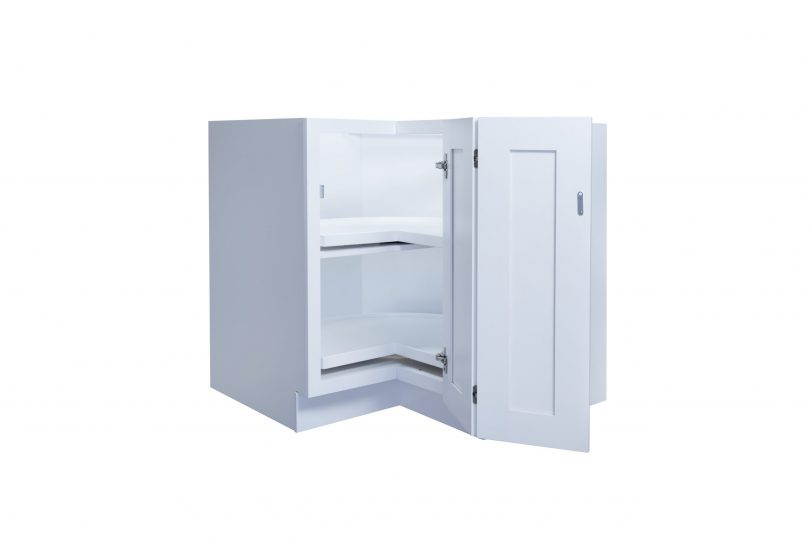 Americans are the masters of convenience and invention – often the two go hand-in-hand, as is the case with the Lazy Susan used in kitchen cabinetry.

When getting into the history of this innovative kitchen design, it’s important to distinguish the several different kinds of Lazy Susans. There are those that are to be found on the tables of dining rooms, restaurants, or banquets, making it possible for different diners to access dishes easily without having to bother passing them. This facilitates an easier flow of conversation uninterrupted by requests to hand over a dish mid-conversation. According to the LA Times, these revolving tables were already being used in 18th-century Britain, though at the time they were called dumbwaiters – they did the duty of serving food while remaining silent (or “dumb”) – and in some situations replaced human domestic helpers.

The term Lazy Susan was used as early as a 1917 advertisement for a “Revolving Server or Lazy Susan” in the American magazine Vanity Fair, and its usage for serving meals, tea, and desserts increased throughout the twentieth century. It wasn’t until the 1940s that it occurred to kitchen cabinetmakers in Indiana to solve the corner cabinet problem by incorporating the Lazy Susan design into kitchen cabinets. It was at this time, during the Second World War, that modular cabinets gained in popularity over custom-made cabinets because they were easier on the pocketbook, but this led to a problem with the space between the kitchen base cabinet and the wall cabinet in modular cabinet design. This area gets its name of the “blind corner” from the fact that it’s tricky to see what’s inside, making it necessary to grasp blindly in the dark for a long-forgotten pan, runaway spice jar, or lid. Enter the corner cabinet Lazy Susan, with rotating disks that make it no more complicated to reach what’s stored in the back than an easy spin of the disk.

Once cabinetmakers introduced the Lazy Susan into cabinet design to make ingenious use of this corner “blind space,” there was no turning back. Nowadays, customers are more interested than ever in making use of this corner area thanks to this ingenious invention that transferred a concept used for centuries on dining tables into the kitchen cabinetry.

There are, of course, no hard and fast rules in terms of Lazy Susan cabinet options. A kitchen corner cabinet Lazy Susan is a perfect spot to consolidate all of your baking supplies, including flours and oils as well as measuring cups and bowls. The best way to keep it organized is to dedicate one shelf to ingredients and the other to utensils. Lazy Susans are also a classic method for storing small items that you may have a lot of, such as spices. A good rule of thumb is to store what you use most frequently on the top shelf, leaving the bottom shelf, which is a little trickier to access, for things that get used just occasionally. A Lazy Susan kitchen cabinet is also an ideal spot to store a collection of teas or coffee items like Keurig cups, a French press, or a coffee grinder. It could also be a twirling snack station with crackers, cookies, popcorn, nuts, and trail mix. Curved baskets work especially well when organizing your Lazy Susan since they fit well with the lines of the disks.

An alternative but no less ingenious solution to the cabinet corner problem is the diagonal corner cabinet, which is a better option for storing heavier materials such as medium-sized appliances such as mixers, blenders, and food processors.