Home » Articles » Summertime Grilling Inside: How to Have BBQ with Your Stove 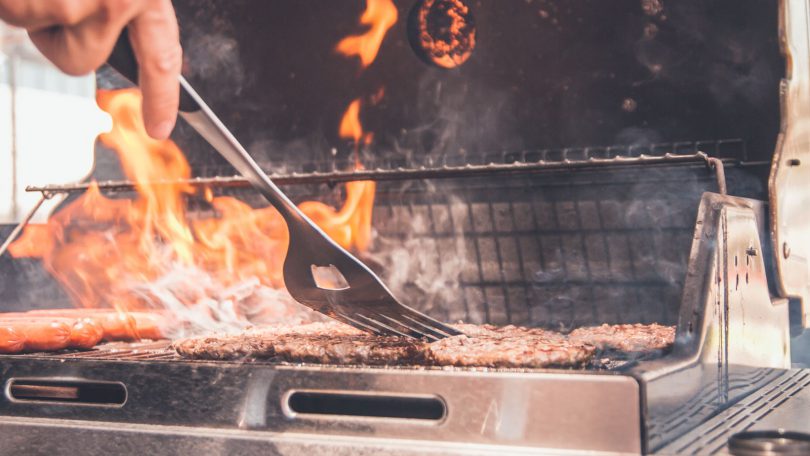 Nothing says summertime like a cookout! Whether you’re more of a hamburger, bratwurst, or veggie dog fan, everything tastes better when grilled. You can throw everything from pineapple or peaches to romaine lettuce onto the grill to provide the perfect accompaniment to barbecue headliners like burgers and hot dogs, or of course go with the more traditional bbq side dish, corn on the cob. But what if you don’t have a barbecue or hibachi to celebrate the warm months with a cookout? Read on to find out a few different ways to get that grilled flavor at home, without having to light a single charcoal briquette.

If you plan on doing a lot of grilling, keep your equipment stowed within arms’ reach, like in a stove top cabinet (also called over the stove cabinets) or in the wall cabinets to the side of the stove. You may even want to consider setting up a “barbecue station” in a lazy susan turntable for corner cabinet or kitchen pantry. What you’ll need: spatulas, grilling skewers, thermometer, tongs, mitts, spices, basting brushes, and aluminum foil.

One advantage to cooking indoors is that you’ll actually have a little more control over the cooking process, and you can get results that are just as good as an outdoor grill by using a cast iron pan that has ridges on it. These ridges will get you the seared lines on your chicken, sausages, or asparagus and that unbeatable smoky taste. Most modern kitchen stoves are equipped with an exhaust fan in the hood, and you’ll want to make use of it when grilling indoors, especially since the smoke won’t just drift away like it would outdoors.

The main difference between broiling and barbecuing food is that food in the broiler is cooked from the top while food on the barbecue is cooked from below. Not all ovens have broilers, so be sure to check before you decide on this option. Broilers will cook food more uniformly and you won’t get the same smokiness as with a barbecue, but when working indoors, this can be a good thing – generally, the vent within the oven will take care of the smoke, so there won’t be much need to use the fan built into the hood of the stove. Here, make use of an oven base cabinet to store all your grilling accessories, and be sure to keep countertops clear while preparing your food so you have enough room to prepare and then finally present your broiled masterpieces!

Though slow cookers are traditionally associated with stews and soups, they’re also great for barbecue recipes, from baby back ribs to brisket. For larger cuts of meat, the slow cooker guarantees that the entire cut will be cooked evenly – on the grill, which cooks much more quickly, this isn’t always guaranteed. Some cooks even opt for a two-step process with the meat going first in the slow cooker and then on the grill for the final touches. You won’t get the same smoky flavor with a slow cooker as you do from a grill, but you can always add a dash of liquid smoke – but be forewarned, a little goes a long way!

Overall, preparing barbecue indoors – whether you’re using a grill pan, broiler, slow cooker, or a combination of these – is pretty easy in terms of cleanup, and makes sense especially for smaller gatherings. Each of these techniques has their own advantages, so try them all out and see which one works best for you!